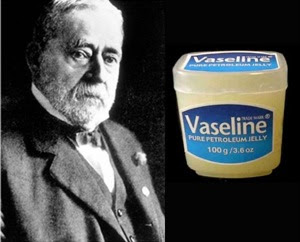 Everything has an interesting fact behind it, whether it is an invention or its application. Vaseline, which a variant of petroleum, also has one of those facts associated with it.

Sir Robert Chesebrough started his career as a chemist who refined kerosene from the oil of the sperm whales. The man was curious to say the least. He discovered Petroleum in Titusville, Pennsylvania and to discover more of this resource he traveled to Titusville quitting his job. He went there to research upon the new materials that might be created from this new found fuel. This is how he discovered petroleum jelly, which he trade named as Vaseline.

Chesebrough had great faith in this product and before sending it to the market for the first time he applied it to his own cuts and burns. Being satisfied with his product, he tried to sell it to a few chemist shops, but no one was ready to trust this new invention of his, and so he failed in all his attempts to sell it.

Then one fine day he traveled to New York to give a demonstration of his product. In front of a large crowd, he burnt his skin with an open flame or an acid, and then applied petroleum jelly all over it, in order to demonstrate the miraculous effect of this product. He even distributed free samples to increase the demand of this product.

His struggle finally paid off in 1870 when he commenced his first factory and named this product ‘Vaseline’ with a patent labeled on it.

Since then several people claimed that Chesebrough had so much faith in his product that he even used to have a spoonful of it every morning! Speculations were proven to be true when Chesebrough himself confessed that he used to have it in the morning for several years – he in fact lived to be 96.

No one knows if this too is a speculation, but it is an undeniable truth that Vaseline has made healing a lot easier in our daily lives.