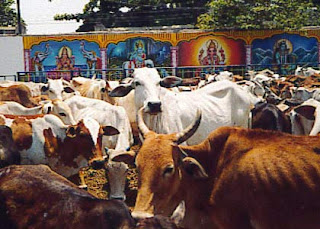 There are more cows in India, than there are cars in the United States!

Cows and cars– simply incomparable, isn’t it? But the comparison will now become interesting when we’ll talk about the fact that there are more cows in India than there are cars in the United States!

It is a well known fact that cows are regarded as holy animals and have a high religious value in India. But what is less known is that India has the largest population of cows than any other country of the world! There are over 280 million cows in India!

Now matching the same with the number of cars in the United States, precisely there were 246 million cars by the end of 2009, which is still less by 34 million when compared to the number of cows in India.

To clarify how large a number this actually is, here also we have taken an instance of the USA, the population of cats and dogs in the United States combined is 171.1 million, which stands nowhere in contrast to the population of cows in India!

Moreover, the USA has 90 million cows, that do not even make up even half of the total cows in India!

Both the numbers of cows and the cars are continuously increasing in the United States but the count up of cows in India is increasing at a faster rate, and USA seems thousands of miles away from matching up with India. Equating with the world, India has more than a quarter, that is 28.9 % of the world’s total cow population!

Today, India stands as the world’s largest dairy producer with more than 304 million cows and buffaloes which produced 112.5 million tonnes of milk in the year 2009-10. Furthermore, the car population in the USA as in 2012 was around 254 million which still couldn’t come to tie with the number of cows in India.

India is the second most populated country of the world but the first nation with the highest number of cows!

This Chicken Breed Has WEIRD Legs!

Monkey as Waiters in Japan